Millionaire Underdog: How to Start, Grow and Explode any Business – by JT Foxx. 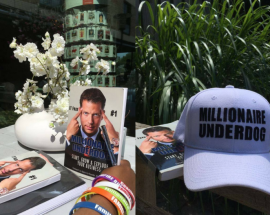 JT Foxx has been deemed the world’s #1 Wealth Coach by media around the world. After starting his real estate business from nothing and then using that success to start what has now become over 50 different companies and brands, JT knows a little something about starting and building an empire from nothing. He’s been featured in and been on the cover of multiple magazines, TV appearances and even had his radio show for a few years. JT also holds some of the largest business and networking events around the world. He has had guests that include, but are not limited to, Sylvester Stallone, Jack Welch, Donna Karan, Arnold Schwarzenegger, Bret Michaels, Steve Wozniak many more.

Millionaire Underdog walks you through marketing, sales, growth, creating a business and not just a job, time management, and everything an entrepreneur needs to know if they want to be successful. This is the crash course MBA for entrepreneurs and business owners.

Let us introduce a short extract from the book:

“All negotiators are liars” – bold statement I know but think about it – aren’t they bluffing and selling the same thing? Let’s say you’re selling your house and you haven’t an offer yet in many months, and when you get your first offer, you counter back with: “Well, we’ve had several offers, so please put your best and offer forward.” If you do this so you can get a better price, are you lying, or should you say to the buyer: “Listen, can you please increase your offer? We haven’t had any offer yet, and we’re super motivated.” If I were the buyer, the second I heard, I would drop my offer by 20%. So, let me ask you – is negotiation lying? I like to compare one’s negotiation skill to a surgeon; it is simply an art. Negotiation success is due to small and strategic surgical incisions that allow you to get to the crux of what you want. Negotiations are crucial to the field of success, as surgeons are to the field of medicine. It is one of the most underutilized skills, yet despite this, there is a problem.

The problem is that everyone assumes that they are good negotiators, so they don’t need to master their craft. I planned a negotiation seminar many years ago, but we canceled it last second because of very low interest. Out of all the events I’ve ever planned, this had the least amount of response, while all my other events were filled to capacity with thousands of attendees. Why? – do you ask; the answer is simple – negotiation is just not a sexy topic. The reality is, the only way the underdog can defeat Goliath is by usually utilizing the power of negotiations. I have defeated some of the biggest and the toughest negotiation battles with the secrets I am about to share with you in this chapter. Now, if you don’t think you have to lie to negotiate, you are naïve.

If you think you have to be smarter to negotiate, you’re oblivious. Now don’t roll your eyes at me because you probably think negotiations are about win-win. Wrong again! I used to be one of those idealistic entrepreneurs. The truth is – I was broke. Win-win is what they teach you in silly

business books; I used to go around saying that until I met an entrepreneur worth over 50 million who says: put your business one on one book down, son. The world doesn’t work that way. Now

negotiations are about two parties who walk away satisfied from the deal, always thinking they could have done better; if one side crushes the other, it really wasn’t a good negotiation. As I reread this part, I can see the ethical dilemma of saying that negotiation is lying. Lying is okay because lying is not okay in most cases, such as misrepresenting facts, being dishonest, or simply conning people. There’s a very fine line here, but I think it all comes down to intention if this is a court of law. Did you negotiate to get a better deal or negotiate to deceive and misrepresent? I think this, as part of the game, is completely okay. But if you have other alternative motives, such as lying can be downright criminal. So, I’m going to try to redefine the rules of

negotiation for the underdog in this chapter, so no one really has to lie but instead rely on pure gut instinct and intuition, so you get what you want. Every single time after reading this chapter, never lose another negotiation again. But negotiations are often won before they start, and sometimes, we negotiate with ourselves, which makes us our own worst enemy”.

JT Foxx promises you after reading “Millionaire Underdog,” it is going to be “the best business book you’ve ever read that you absolutely won’t put down, and I guarantee you, you’ll read it more than once.”